18 For the wrath of God is revealed from heaven against all ungodliness and unrighteousness of men who suppress the truth in unrighteousness, 19 because that which is known about God is evident within them; for God made it evident to them. 20 For since the creation of the world His invisible attributes, His eternal power and divine nature, have been clearly seen, being understood through what has been made, so that they are without excuse. 21 For even though they knew God, they did not honor Him as God or give thanks, but they became futile in their speculations, and their foolish heart was darkened. 22 Professing to be wise, they became fools, 23 and exchanged the glory of the incorruptible God for an image in the form of corruptible man and of birds and four-footed animals and crawling creatures.

24 Therefore God gave them over in the lusts of their hearts to impurity, so that their bodies would be dishonored among them. 25 For they exchanged the truth of God for a lie, and worshiped and served the creature rather than the Creator, who is blessed forever. Amen. 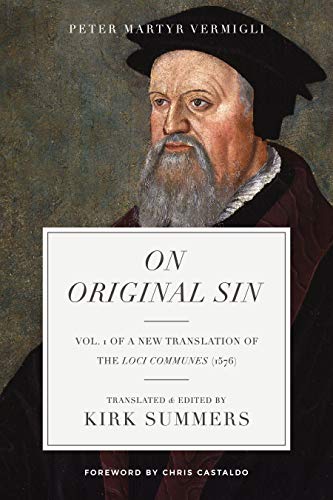 A little about Vermigli by Chris Castaldo, author of the Forward and Introduction:

“Confronted by the persecution, force, and cruelty of this world, Peter Martyr Vermigli (1499–1562) urged Christians to leave the shadows of ignorance and recognize two realities: their identity in Christ and the sure hope of one day seeing God face to face. This, he contends, is ‘man’s ultimate happiness, the delight that surpasses all worldly pleasure’—to be accepted by the eternal Father in Christ.”

More from Amazon.com (click image of book to go there):

“Peter Martyr Vermigli (1499-1562) was a forgotten giant of the Protestant Reformation. With a legacy that spanned from Naples to Zurich to Oxford, Vermigli left behind him voluminous biblical commentaries and treatises, and a band of faithful disciples who collected his writings into the massive theological compendium, the Loci Communes. ‘On Original Sin’ represents the first installment of a new project to translate the Loci into English for the first time since 1583. Presented here in a clear, readable, and learned translation, Vermigli’s searching discussion of original sin reveals the biblical and patristic foundations of this controversial doctrine, and its centrality to Protestant orthodoxy.”