“Heaven and earth will pass away, but My words will not pass away.”

“The greatest proof that the Bible is inspired is that it has withstood so much bad preaching!”

16 By common confession, great is the mystery of godliness:

He who was revealed in the flesh,
Was vindicated in the Spirit,
Seen by angels,
Proclaimed among the nations,
Believed on in the world,
Taken up in glory.

4 But when the fullness of the time came, God sent forth His Son, born of a woman, born under the Law. . .

Christian Quotes of the Day

“He was created of a mother whom he created. He was carried by hands that he formed. He cried in the manger in wordless infancy, he the Word, without whom all human eloquence is mute.”

“The glory of the incarnation is that it presents to our adoring gaze not a humanized God or a deified man, but a true God-man – one who is all that God is and at the same time all that man is: one on whose almighty arm we can rest, and to whose human sympathy we can appeal.”

19 For your obedience has become known to all. Therefore I am glad on your behalf; but I want you to be wise in what is good, and simple concerning evil. 20 And the God of peace will crush Satan under your feet shortly.

De Chirico’s article “What Do You Think About Pope Francis?” is really helpful. In it he states that it is “vitally important for evangelicals to know who Pope Francis really is.” If you read only this excerpt, you will be wiser.

“It comes as no surprise then that the first saint that Pope Francis proclaimed in 2013 was Pierre Favre (1506-1546), a French first generation Jesuit with a ‘smiling face’ who more than others tried to look like a Protestant in order to drive people back to the Roman Church. 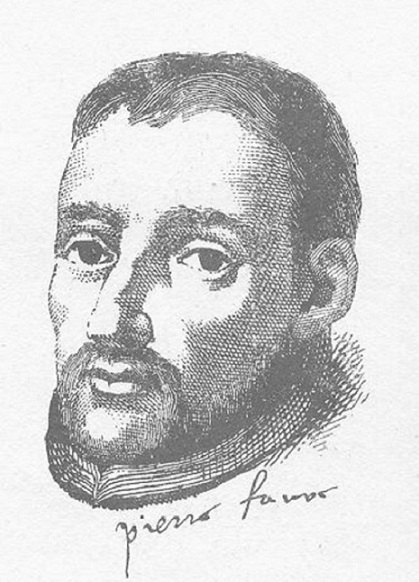 Pierre Favre (Peter Faber), Co-founder of the Company of Jesus

“Furthermore, the Jesuit side of Pope Francis is clear enough given his published (and never retracted) opinion that Luther and Calvin destroyed man, poisoned society, and ruined the church! In his 1985 lecture on the history of the Jesuit order, he gave severe evaluations of Luther (a ‘heretic’), and especially of Calvin (a ‘heretic’ and ‘schismatic’) bringing about the ‘Calvinist squalor’ in society, in the church, and in man’s heart. According to that lecture, Protestantism lies at the root of all evils in the modern West. The fact that this lecture was republished unchanged in 2013 in Spanish and translated in 2014 into Italian with his permission, but without a mitigating word of explanation, indicates that this assessment still lingers in the Pope’s heart and mind. He recently added a harsh comment on the Puritans, falsely associating them with a bigoted and merciless form of Christianity. This friendly Pope to Evangelicals is a Jesuit whose entire mission of order is to defend the Roman Church against Protestantism. Certainly Francis is a smiling Jesuit, but the anti-Protestant still beats in his heart.”

What Do You Think About Pope Francis?

Some evangelical leaders pray with Pope Francis in May 2015

Here is Pio Nono (Pius IX), the longest reigning pontiff and the man who convened the First Vatican Council where the doctrine of papal infallibility was defined.

Reading a post at The Antipas Chronicles, I learned that Pio Nono made this statement about himself as pope:

“I alone…am the successor of the apostles, the vicar of Jesus Christ…I am the way, the truth, and the life…”

The Antipas Chronicles gave the source as History of the Christian Church by Henry Charles Sheldon, p. 59. I clicked a link at the end of the post and landed at the website highlighted below, where many quotes like this appear:

For myself, I needed to verify Pio Nono’s statement, hoping to do this in an authoritative document such as an encyclical. Pio’s encyclicals can be found at the following link. When I visited the page I realized that, at least for now, this task was impossible.

At Archive.org I found Sheldon’s History of the Christian Church. Below is this incredible quote in context. Hang on for a wild ride in papal history! (Emphasis added.)

An advance of sentimental devotion like that which has been sketched meant of course a prodigal strewing of incense before the Pope. In 1866 the Bishop of Bordeaux spoke of the Pope as “the centre of the divine government and the living incarnation of the authority of Christ.”1 Strong as is this statement, it rather yields the palm to that which Pius IX uttered of himself in the same year. If the Ultramontane papers of France can be trusted, the Pope said: “Despite my unworthiness, I alone am the successor of the apostles, the vicar of Jesus Christ, I alone have the mission to guide and direct the barque of Peter, I am the way, the truth, and the life.”2 Another expression, attributed to the Pope by no hostile hand, indicates a pronounced conviction that it was a part of his function to be the death of men as well as their life. Referring to excommunications visited upon those who had invaded the States of the Church and secured their annexation to the kingdom of Italy, he said: “True, I cannot, like Saint Peter, hurl certain thunders which turn bodies to ashes; nevertheless, I can hurl thunders which turn souls to ashes. And I have done it by excommunicating all those who perpetrated the sacrilegious spoliation, or had a hand in it.”

An article of the Civilta Cattolica in 1867 teaches, respecting the relation of the people to the Pope, that “it is necessary for them to understand that from him they derive their faith, from him their religious life, and that he is the dispenser of spiritual graces.”  In an article of the same journal, in the following year, it is said: “The treasures of revelation, treasures of truth, treasures of justice, treasures of spiritual gifts, have been deposited upon earth in the hands of one man, who is the sole dispenser and custodian of them. . .This man is the Pope.” An equivalent statement, written just before the declaration of infallibility, is given in the following: “Christ is the voice of the Father, and the Pontiff is the voice of Christ. The Father in the fulness of time spake unto us by His Son. The Son, after His return to the Father, continues to speak to us by His Vicar. . .Affirming the infallibility of the Pontiff, therefore, means no less than affirming the duration of the reign of Christ upon earth.” In harmony with this sentiment, the opponents of infallibility in the council [Vatican I] are styled New Arians, — impugners of the divinity resident in the Pope. Veuillot, the Pope’s lay shouter in France, did not shim to utter such sentences as these: “The Pope is, like Jesus Christ, the absolute ruler of consciences and sceptres; Jesus Christ, sovereign master of all things, resides in the Pope, not only by the title of pontiff, but still further by that of king of kings.”

Others also compassed the incredible by calling the Pope the “Holy Spirit” or “the Eucharist.” Gratry, to whom such expressions seemed sheer madness, narrates: “Is it not to myself that a priest, a man very pious, very zealous, very well informed, said and repeated these words. Yes, there is upon the earth a man who can say, ‘I am the Holy Spirit’? It is to myself that a most honorable Catholic writer, after a discussion upon this point, wrote a long letter to maintain, as pious and true, this proposition: ‘The Pope is the Eucharist.'” The meaning of this last expression, notwithstanding its singularity, is sufficiently obvious: it denotes that the Pope, like the eucharistic elements, is the visible shrine of the most holy presence of the God-man. Faber — whose special function seems to have been to carry the Oxford movement to a reductio ad absurdum, through the complete sacrifice of reason to a sentimental and materialized devotion — adopts this view. “The Pope,” he says, “is for us in our whole conduct that which the Holy Sacrament is for our adorations. The mystery of his office as Vicar resembles the mystery of the Holy Sacrament: the two mysteries are intertwined, so to say, one with the other,” He adds: “One might as well try to be a good Christian without devotion to the blessed Virgin, as without devotion to the Pope. The devotion to the Pope is an essential part of Christian piety, an indispensable element of all Christian holiness.” Even Cardinal Manning, though writing under conditions which dictated caution and moderation, has subscribed to the view that all true history is absorbed in the record of the popes. “I am not afraid of defending,” he wrote, “the condensed statement of Donoso Cortes: ‘The history of civilization is the history of Christianity; the history of Christianity is the history of the Church; the history of the Church is the history of the pontiffs.'” When men of note speak with so little restraint, a measure of extravagance can easily be pardoned in the ordinary biographer. We read therefore with a good degree of complacency, in a Life of Leo XIII, that the lamp in the Pope’s study “gives forth that supernal light which illuminates both hemispheres.”

In the line of recent pageants for expressing the worshipful eminence of the Pope, none perhaps has excelled the ceremony of professing obedience at the Vatican Council, in which the cardinals kissed the hand of the Pope; the patriarchs, primates, archbishops, and bishops, after a low obeisance, kissed his right knee; and the abbots, after kneeling, kissed his foot. The scene might have provoked the envy of Caligula, Domitian, and others of the old Roman emperors who received divine honors before their death. When we reflect that this was only a more signal specimen among a throng of kindred displays, we can easily accept the words of the Spanish statesman Castelar when he says, “All this universal homage was only too sure to foster in the Pope’s mind the conceit of his being, not only a singular and privileged mortal, but a very God upon earth.“

Sources for the footnotes:

If you’re Catholic or an unbeliever and are offended by what I’ve presented, you should vett it. But more importantly, turn from your sins to the Son of God Jesus Christ! Only He can save you from judgment. His Father will become your Father. Hear His words – they couldn’t be plainer. He made it simple for us,

28 Come to Me, all you who labor and are heavy laden, and I will give you rest. 29 Take My yoke upon you and learn from Me, for I am gentle and lowly in heart, and you will find rest for your souls. 30 For My yoke is easy and My burden is light.”

5 For there is one God and one Mediator between God and men, the Man Christ Jesus, 6 who gave Himself a ransom for all, to be testified in due time…