Then He said to them, “Take heed what you hear. With the same measure you use, it will be measured to you; and to you who hear, more will be given.

14 And unto the Angel of the Church of the Laodiceans write, These things saith Amen, the faithful and true witness, that beginning [origin, source]∗ of the creatures of God.

15 I know thy works, that thou art neither cold nor hot: I would thou werest cold or hot.

16 Therefore because thou art lukewarm, and neither cold nor hot, it will come to pass, that I shall spew thee out of my mouth.

17 For thou sayest, I am rich, and increased with goods, and have need of nothing, and knowest not how thou art wretched and miserable, and poor, and blind, and naked.

19 As many as I love, I rebuke and chasten: be zealous therefore and amend.

20 Behold, I stand at the door, and knock, If any man hear my voice, and open the door, I will come in unto him, and will sup with him, and he with me.

21 To him that overcometh, will I grant to sit with me in my throne, even as I overcame, and sit with my Father in his throne.

22 Let him that hath an ear, hear what the Spirit saith unto the Churches.

*The beginning of the creation of God (η αρχη της κτισεως του τεου — hē archē tēs ktiseōs tou theou). Not the first of creatures as the Arians held and Unitarians do now, but the originating source of creation through whom God works (Colossians 1:15, Colossians 1:18, a passage probably known to the Laodiceans, John 1:3; Hebrews 1:2, as is made clear by Revelation 1:18; Revelation 2:8; Revelation 3:21; Revelation 5:13).

May the Lord not count us in their number, but among the noble-minded Bereans and faithful Philadelphians!

“The city of this name mentioned in Scripture lay on the confines of Phrygia and Lydia, about 40 miles east of Ephesus (Revelation 3:14), on the banks of the Lycus. It was originally called Diospolis and then Rhoas, but afterwards Laodicea, from Laodice, the wife of Antiochus II, [Seleucid] king of Syria, who rebuilt it. It was one of the most important and flourishing cities of Asia Minor. At a very early period it became one of the chief seats of Christianity (Colossians 2:1; 4:15; Revelation 1:11, etc.). It is now a deserted place, called by the Turks Eski-hissar or ‘old castle.'”

“. . . Little is known of the early history of Christianity there; Timothy, Mark and Epaphras (Colossians 1:7) seem to have been the first to introduce it. However, Laodicea was early the chief bishopric of Phrygia, and about 166 A.D. Sagaris, its bishop, was martyred. In 1071 the city was taken by the Seljuks; in 1119 it was recovered to the Christians by [Byzantine Emperor] John Comnenus, and in the 13th century it fell finally into the hands of the Turks. . .”

“. . .  The city lay on one of the great Asian trade routes, and this ensured its great commercial prosperity. Laodicea was a leading banking center. In 51 B.C. Cicero, en route for his Cilician province, cashed drafts there. It was no doubt the rich banking firms which, in A.D. 60, financed the reconstruction of the city after the great earthquake which prostrated it. Laodicea refused the Senate’s earthquake relief. She was ‘rich and increased with goods’ and had ‘need of nothing’ (Revelation 3:17). The Lycus valley produced a glossy black wool, the source of black cloaks and carpets, for which the city was famous. Laodicea was also the home of a medical school, and the manufacturer of collyrium, a famous eye-salve. The scornful imagery of the apocalyptic letter to Laodicea is obviously based on these activities. It also has reference to the emetic qualities of the soda-laden warm water from nearby Hierapolis, whose thermal springs ran into the Meander. Laodicea’s water supply also came from Hierapolis, and Sir William Ramsay suggests that its vulnerability, together with the city’s exposed position, and its easy wealth caused the growth in the community of that spirit of compromise and worldly-mindedness castigated in the Revelation. Under Diocletian [Roman Emperor, A.D. 284-305], Laodicea, still prosperous, was made the chief city of Phrygia – Wikipedia. (The Zondervan Pictorial Bible Dictionary)”

“. . . We have good reason for believing that when, in writing from Rome to the Christians of Colossae, he [Paul] sent a greeting to those of Laodicea, he had not personally visited either place. But the preaching of the gospel at Ephesus (Acts 18:19; Acts 19:41) must inevitably have resulted in the formation of churches in the neighboring cities, especially where Jews were settled; and there were Jews in Laodicea. In subsequent times it became a Christian city of eminence, the see of bishop and a meeting-place of councils. The Mohammedan invaders destroyed it, and it is now a scene of utter desolation, as was prophesied in (Revelation 3:14-22) and the extensive ruins near Denislu justify all that we read of Laodicea in Greek and Roman writers. Another biblical subject of interest is connected with Laodicea. From (Colossians 4:16) it appears that St. Paul wrote a letter to this place when he wrote the letter to Colossae. Ussher’s view is that it was the same as the Epistle to the Ephesians, which was a circular letter sent to Laodicea among other places. The apocryphal Epistola ad Laodicenses is a late and clumsy forgery.

The Final Prophecy of Jesus: An Introduction, Analysis, and Commentary on the Book of Revelation, Oral Edmond Collins, pp. 96-97

“15. The Laodiceans were spiritually neither cold nor hot. 16. Because you are . . . neither hot nor cold—am about to spit you out. The analogy of hot and cold is best understood of the medicinal hot springs at Hieropolis and the cold, pure water of Colossae. The point is not that the ‘spiritual temperature’ of the Laodiceans is medium. Though they excelled in the material arts and commerce, spiritually they lacked any utilitarian value. Their works were barren. . .”

“The present-day visitor to Laodicea finds a large area littered with broken marble, tops of stone masonry walls, and here and there public buildings: two theaters, a large stadium, nearby it a water tower, an odeon, and the nymphaeum which was excavated in 1961-1963. In the side of the hill just as one approaches Laodicea one can also see the truncated conduits that were part of the water supply system for the city. Much, much more is obviously right under foot.”

“One of the principles of medicine at that time was that compound diseases required compound medicines. One of the compounds used for strengthening the ears was made from the spice nard (spikenard? an aromatic plant). Galen says that it was originally made only In Laodicea. . . Galen also described a medicine for the eyes made of Phrygian stone. Aristotle spoke of it as a Phrygian powder. Ramsay tries to explain what kind of medicine it was by saying it was not an ointment but a cylindrical collyrium that could be powdered and then spread on the part affected. The term used by John in Revelation is the same that Galen uses to describe the preparation of the Phrygian stone.  Would not these medicinal concoctions be a reason why John cautions the Laodiceans to buy ‘ointment for your eyes so that you may see’ (Rev. 3:18)?”

[Bausch and Lomb makes collyrium eyewash for personal use. Collyrium is also used in an emergency to flush foreign bodies and chemicals from the eye.]

Roman province of Lydia circa 50 AD – English legend, Photo – Caliniuc. Laodicea is in the neighboring province of Phrygia, spelled LAODIKEIA. 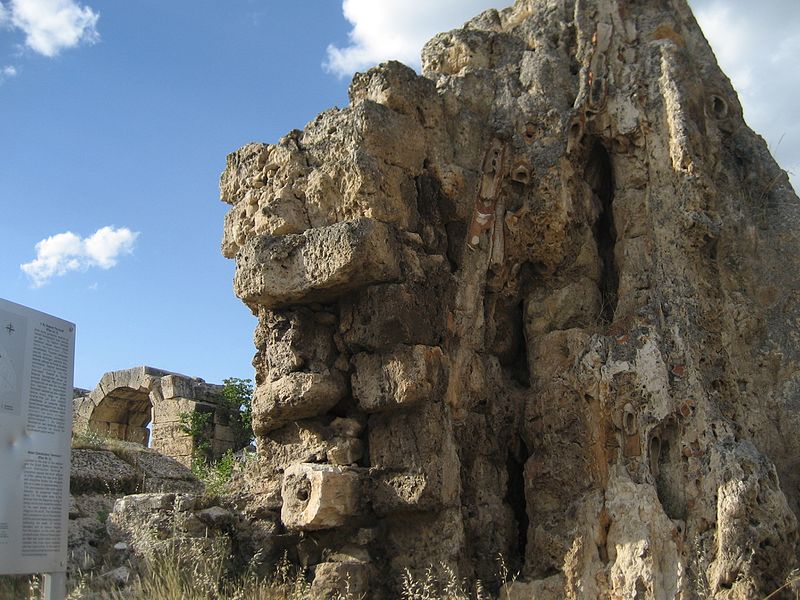