1 And write unto the Angel of the Church which is at Sardis, These things saith he that hath the seven Spirits of God, and the seven stars, I know thy works: for thou hast a name that thou livest, but thou art dead.

2 Be awake, and strengthen the things which remain, that are ready to die: for I have not found thy work perfect before God.

3 Remember therefore, how thou hast received and heard, and hold fast and repent. If therefore thou wilt not watch, I will come on thee as a thief, and thou shalt not know what hour I will come upon thee.

4 Notwithstanding thou hast a few names yet in Sardis, which have not defiled their garments: and they shall walk with me in white: for they are worthy.

5 He that overcometh, shall be clothed in white array, and I will not put out his Name out of the book of life, but I will confess his name before my Father, and before his Angels.

6 Let him that hath an ear, hear what the Spirit saith unto the Churches.

Wherefore he saith, Awake thou that sleepest, and stand up from the dead, and Christ shall give thee light.

The message to the Angel of the Church at Sartis contains a statement that leads to a troubling question: Can someone who is born again, in whom the Spirit of Christ dwells, have their name blotted out of the Book of Life? Here is help to answer this:

A problem has arisen in the minds of some. If the Lord states that He will not blot out the name of the overcomer from the book of life, does this not mean that other names can be blotted out of the book of life? In other words, does this verse not teach that it is possible for one who has really been born again to lose his salvation?. . . The problem will disappear when we realize the principle of Scriptural interpretation that no obscure passage should ever be quoted in contradiction to a clear line of Scriptural teaching for which there are plain statements and great masses of teaching.

I’m grateful for light on this passage. The message to Sardis not only contains this difficulty but it is sad, or rather, somber. Do you agree that it is? May the Lord help us to live in the light of eternity and to let go of this world which is passing away! 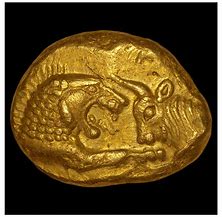 “. . . Sardis was famous for arts and crafts, and was the first center to mint gold and silver coinage. So wealthy were the Lydian kings, that  Croesus became a legend for riches, and it was said that the sands of the Pactolus were golden. Croesus also became a legend for pride and presumptuous arrogance, when his attack on Persia led to the fall of Sardis and the eclipse of his kingdom. The capture of the great citadel by surprise attack by Cyrus and his Persians in 549 B.C., and three centuries later by the Romans, may have provided the imagery for John’s warning in Revelation 3:3. The great earthquake of 17 A.D. ruined Sardis physically and financially. The Romans contributed 10,000,000 sesterces in relief, an indication of the damage done, but the city never recovered.”

“Sardis is of special interest to the student of Herodotus and Xenophon, for there Artaphernes, the brother of Darius, lived, and from there Xerxes invaded Greece and Cyrus marched against his brother Artaxerxes. . . It was moreover one of the oldest and most important cities of Asia Minor, and until 549 BC, the capital of the kingdom of Lydia. It stood on the northern slope of Mt. Tmolus; its acropolis occupied one of the spurs of the mountain. At the base flowed the river Pactolus which served as a moat, rendering the city practically impregnable. Through the failure to watch, however, the acropolis had been successfully scaled in 549 BC by a Median soldier, and in 218 by a Cretan (compare Revelation 3:2,3). Because of its strength during the Persian period, the satraps here made their homes. However, the city was burned by the Ionians in 501 BC, but it was quickly rebuilt and regained its importance. In 334 BC it surrendered to Alexander the Great who gave it independence, but its period of independence was brief, for 12 years later in 322 BC it was taken by Antigonus. In 301 BC, it fell into the possession of the Seleucidan kings who made it the residence of their governor. It became free again in 190 BC, when it formed a part of the empire of Pergamos, and later of the Roman province of Asia. In 17 AD, when it was destroyed by an earthquake, the Roman emperor Tiberius remitted the taxes of the people and rebuilt the city, and in his honor the citizens of that and of neighboring towns erected a large monument, but Sardis never recovered its former importance (compare Revelation 3:12). Again in 295 AD, after the Roman province of Asia was broken up, Sardis became the capital of Lydia, and during the early Christian age it was the home of a bishop. The city continued to flourish until 1402, when it was so completely destroyed by Tamerlane that it was never rebuilt. Among the ruins there now stands a small village called Sert, a corruption of its ancient name . . .”

The Message to Sardis

“. . . The message to Sardis lists no specific enemies, internal or external. There is no name calling – no liars, no Balaam or Jezebel, no deep secrets of Satan, no synagogue of Satan, no throne of Satan. Consequently, of all the congregations in Asia, we know least about Sardis and its problems. Yet no other message is more damaging or more urgent than this one. . .

“[Sardis’s] greatest days were behind it, but. . . was still, under Roman rule, an important center of the woolen industry. Abundant archaeological remains include a temple to Artemis, a huge gymnasium and the largest synagogue yet found in the ancient world, suggesting a Jewish community numbering in the thousands (Finegan 1981:177-78). A sermon of Melito, a Christian bishop at Sardis, entitled On the Passover (see Hawthorne 1975:147-75), testifies to a spirited, sometimes bitter, debate with this Jewish community in the second century. Yet as far as we are told, the problem of the congregation in John’s time was not with the Jews, nor with the Roman Empire, nor with false prophecy, but solely with itself. . .

You are dead (v. 1) is a dramatic way of saying “you are spiritually asleep” (compare Eph 5:14), for the angel is then told, Wake up! Strengthen what remains and is about to die (v. 2). The call to awake, and to remember, obey and repent (v. 3) assumes the real possibility of change. Yet the milder-sounding words that follow, I have not found your deeds complete in the sight of my God (v. 2), are deliberately understated, implying that the angel’s works are unacceptable to God, and therefore a failure (Beckwith 1922: 474; compare Dan 5:27, “You have been weighed on the scales and found wanting”). . .

“The message to Sardis reveals nothing definite about the church’s predicament beyond the fact that it is about to die. Only the metaphorical reference to those few people in Sardis who have not soiled their clothes (v. 4) offers a possible clue. They are promised that they will walk with me, dressed in white, for they are worthy (v. 4), a promise immediately reinforced by a word to those who ‘overcome,’ who will, like them, be dressed in white, whose names will not be blotted from the book of life, but rather acknowledged before my Father and his angels (v. 5; compare Mt 10:32-33 par. Lk 12:8-9). At Sardis, clearly, the few who had not soiled their garments were the ‘overcomers.’

“. . . It is likely that the problem at Sardis was a strong tendency to compromise Christian faith for the sake of conformity to social and cultural standards set by Asian society and the Roman Empire. This spirit of compromise was linked not to one particular faction in the Christian community (as at Pergamum and Thyatira) but to the majority. The ones who had not soiled their clothes had become marginalized. They were the small faction. This explains the severe tone of the message, but it is impossible to be more specific as to the exact nature of the compromises made at Sardis.”