12 And to the Angel of the Church, which is at Pergamos write, Thus saith he which hath that sharp sword with two edges.

13 I know thy works, and where thou dwellest, even where Satan’s throne is, and thou keepest my Name, and hast not denied my faith, even in those days when Antipas my faithful martyr was slain among you, where Satan dwelleth.

14 But I have a few things against thee, because thou hast there them that maintain the doctrine of Balaam, which taught Balak to put a stumbling block before the children of Israel, that they should eat of things sacrificed unto idols, and commit fornication.

15 Even so hast thou them that maintain the doctrine of the Nicolaitans, which thing I hate.

16 Repent thyself, or else I will come unto thee shortly, and will fight against them with the sword of my mouth.

17 Let him that hath an ear, hear what the spirit saith unto the Churches. To him that overcometh, will I give to eat of the Manna that is hid, and will give him a white stone, and in the stone a new name written, which no man knoweth, saving he that receiveth it.

The Lord’s rebuke of the Church at Pergamos recalls Jude’s inspired words (KJV):

4 For there are certain men crept in, which were before of old ordained to this condemnation: ungodly men they are, which turn the grace of our God into wantonness, and deny God the only Lord, and our Lord Jesus Christ. . .

11 Woe be unto them: for they have followed the way of Cain, and are cast away by the deceit of Balaam’s wages, and perish in the gainsaying of Korah.

*Geneva Bible footnote, verse 13: The faith of them of Pergamos is so much the more highly commended because they remained constant even in the very heat of persecution.

“Pergamum, Pergamos, was a city of Mysia in the Caicus valley, 15 miles inland; In KJV, Pergamos. Royally situated in a commanding position, Pergamum was the capital until the last of the Pergamenian kings bequeathed his realm to Rome in 133 B.C.  Pergamum became the chief town of the new province of Asia, and the site of the first temple of the Caesar-cult, erected to Rome and Augustus in 29 B.C. A second shrine was later dedicated to Trajan. . . The worship of Asklepios and Zeus were also endemic. The symbol of the former was a serpent, and Pausanias describes his cult image ‘with a staff in one hand and the other on the head of a serpent.’ . . . On the crag above Pergamum was a throne-like altar to Zeus now in the Berlin Museum (Revelation 2:13?). . . It is natural that ‘Nicolaitanism’ should flourish in a place where politics and paganism were so closely allied and where pressure on Christians to compromise must have been heavy. Pergamum was an ancient seat of culture and possessed a library which rivaled Alexandria’s. Parchment (charta Pergamena) was invented at Pergamum to free the library from Egypt’s jealous ban on the export of papyrus.”

The Final Prophecy of Jesus, An Introduction, Analysis, and Commentary on the Book of Revelation, Oral Edmond Collins, 2007

“12. . . . [Pergamum] was the place where the Roman Emperor was worshipped after the fashion of the ancient Babylonian mysteries. 13. The Babylonian cult was for centuries prior to the writing of the Revelation a focal point for Satan worship, including sexual orgies and the veneration of the serpent. At the death of King Attalus  III Philometer in 133 B.C., his will ceded Pergamum to the Romans. Attalus was the last to inherit the title, Pontifex Maximus, ‘Divine’ high priest of the cult. After a time the Roman Emperor took to himself the local cultic function and the title, Pontifex Maximus. In 29 B.C. the Imperial cult erected in Pergamum a temple to the Emperor Augustus. The provincial governor functioned as the local high priest of the cult. In the second century, a second temple was erected to Trajan and a third to Severus.

14. On the teaching of Balaam, see Num. 1:1-36; cf. 25:1-3. Balaam, a false prophet of the LORD, offended the kings of Moab who had hired him by blessing Israel whom he had been hired to curse. Apparently, to regain their favor and perhaps collect his pay, he then advised the kings to use their Midianite women to seduce the men of Israel into attending temple banquets, practicing sexual immorality, and worshiping Baal of Peor. Religious prostitution was common to much of the pagan worship in the ancient Mediterranean lands. It was practiced by the Nicolaitan cult in the name of Christianity. . . 15. The Nicolaitans, probably falsely, attributed their heinous doctrine to Nicolaus, the deacon of the Jerusalem church (Acts 6:5). Their error was a variety of Gnostic philosophy, which held that, because the material and spiritual worlds are essentially separate, licentious conduct was not in conflict with the Christian faith. They therefore imported into Christian piety practices which were common to pagan temples (cf. Jude 3-16). 16. The Lord’s commandment was to repent. . . Indeed, repentance and purity are frequently reiterated themes in our Lord’s last prophecy. The Lord will fight against the unrepentant. . . The language of the text implies both temporal as well as eternal judgment. . . Through this text Christ speaks as the Divine Judge with absolute authority.”

[These schools of heresy are categorized by geography, doctrine, and ethics: Nicolaitanism is from Asia Minor, belongs to the ‘Christian’ group, and is libertine.]

“The arbitrary and unbalanced subjectivity of the Gnostic speculation naturally produced a multitude of schools. These Gnostic schools have been variously classified. . .  The ethical point of view, from which the division might as well be made, would give likewise three main branches: the speculative or theosophic Gnostics (Basilides, Valentine), the practical and ascetic (Marcion, Saturninus, Tatian), and the antinomian and libertine (Simonians, Nicolaitans, Ophites, Carpocratians, Antitactes).

[Pastor Barnhouse was committed to the Church-Age view of the letters in Revelation 2 and 3.]

“The very word ‘Pergamos’ has in it the same root from which we get our English words for bigamy and polygamy. It is the word for marriage. The particle which forms the first syllable frequently calls attention to something that is objectionable. ‘Pergamos’ signifies a mixed marriage in the most objectionable sense of the word, for it is the marriage of the organization of the church of Jesus Christ with the world in defiance of the distinct command of the Spirit, ‘Be ye not unequally yoked together with unbelievers: for what fellowship hath righteousness with unrighteousness? and what communion hath light with darkness? And what concord hath Christ with Belial? or what part hath he that believeth with an infidel? And what agreement hath the temple of God with idols?’ (II Cor. 6:14-16)”

Invalids from all over the province of Asia flocked to the temple of Asklepios and there, while they were sleeping, Asklepios was believed to reveal through their dreams remedies with which priests and physicians could heal them. Obviously, opportunities for deception were many. [Human nature, our folly, hopelessness, and wickedness, is the same in every era.]

There were  many Jews at Pergamos, and in 130 BC the people of the city passed a decree in their favor. Many were more or less assimilated with the Greeks, even to the extent of bearing Greek names.

“. . . the Nazi Party’s chief architect, Albert Speer, was commissioned by the new chancellor, Adolf Hitler, to design the parade grounds for the party rallies in Nuremberg. Speer turned to the Pergamon Altar for inspiration. Using the altar as a model, Speer created a colossal grandstand, known as the Zeppelin tribune. In the following years’ mass rallies, Hitler descended down the steps like a tribune in ancient Rome. . .

“Hitler’s Final Solution is known as the Holocaust, a word that comes from a Greek word meaning ‘a wholly burnt animal sacrifice.’ On the ancient Altar of Zeus in Pergamom, burnt sacrifice was practiced. Centuries later in Germany’s Nuremberg, in the redesigned Pergamon Altar, Hitler announced his Final Solution to the world and this time, the burnt sacrifice was six million Jews.”

site of the sparse remains of the Altar of Zeus at Pergamon as seen from the Sanctuary of Athena (the oldest structure on the acropolis dated 4th century BC). 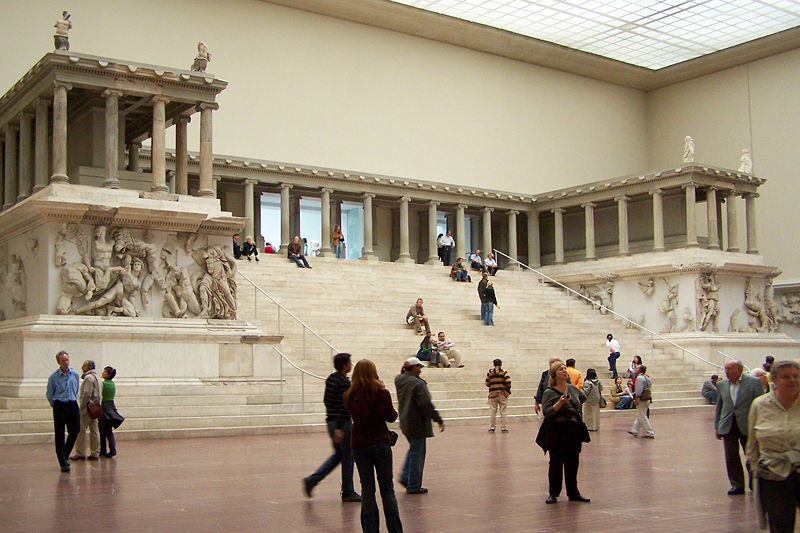 26 thoughts on “Reading through Revelation, Chapter 2:12-17 – Pergamos, the Lord’s commendation and rebuke”