Because their lives are hidden with Christ in God, we will not know the trials and victories of many of our brothers and sisters until heaven.

The Lord Himself is their great reward.

Blessed is the man who endures temptation; for when he has been approved, he will receive the crown of life which the Lord has promised to those who love Him.

After these things the word of the Lord came to Abram in a vision, saying, “Do not be afraid, Abram. I am your shield, your exceedingly great reward.”

If then you were raised with Christ, seek those things which are above, where Christ is, sitting at the right hand of God. 2 Set your mind on things above, not on things on the earth. 3 For you died, and your life is hidden with Christ in God. 4 When Christ who is our life appears, then you also will appear with Him in glory.

“Many a dear servant of God has rejected wealth or fame because the price was too high.”

GURNALL, WILLIAM (1617-1679), English author, was born in 1617 at King’s Lynn, Norfolk. He was educated at the free grammar school of his native town, and in 1631 was nominated to the Lynn scholarship in Emmanuel College, Cambridge, where he graduated B.A. in 1635 and M.A. in 1639. He was made rector of Lavenham in Suffolk in 1644; and before he received that appointment he seems to have officiated, perhaps as curate, at Sudbury. At the Restoration he signed the declaration required by the Act of Uniformity, and on this account he was the subject of a libellous attack, published in 1665, entitled Covenant-Renouncers Desperate Apostates. He died on the 12th of October 1679.

Gurnall is known by his Christian in Complete  Armour, published in three volumes, dated 1655, 1658 and 1662. It consists of a series of sermons on the latter portion of the 6th chapter of Ephesians, and is described as a “magazine from whence the Christian is furnished with spiritual arms for the battle, helped on with his armour, and taught the use of his weapon; together with the happy issue of the whole war.” The work is more practical than theological; and its quaint fancy, graphic and pointed style, and its fervent religious tone render it still popular with some readers. 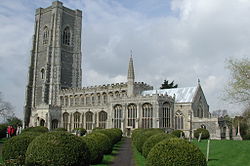 8 thoughts on “A reminder from long ago, about saints who overcome”