. . . by his Excursus* on the ‘Adoration’ of the Church of Rome, addressed to Popes, and to Images.”

*a detailed discussion of a particular point in a book, usually in an appendix; a digression in a written text. Thanks, Bing! 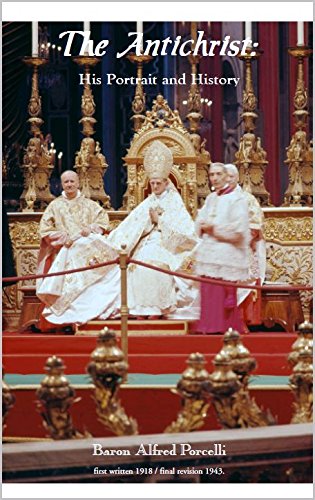 “Baron Alfred Porcelli, R.E., was born in Palermo, Italy, his father being Colonel Baron A.S.R. Porcelli di S. Andrea, supporter of Garibaldi the Italian liberator. His mother was a Scottish lady. As a young man, Baron Porcelli became a naturalized British subject and served Queen Victoria in the Royal Engineers. He died at Hove, November 4th, 1937, at the advanced age of eighty-eight years.”  AbeBooks.com

The following is a little difficult to read because of the many references within it and some Latin, but is well worth reading for its Biblical insight into Rome’s veneration of images.

I added Scripture links to a Catholic Bible, the 1899 Douay Rheims Version, because Porcelli referenced an edition of the Douay. At the end of the post, you’ll find Strong’s definitions of the two Biblical terms that demonstrate Rome’s error. I’m not a scholar but a wife and a former Catholic, whose Italian grandfather looked somewhat like the picture below. I’m grateful that Grandpop had a very different kind of life.

As Dr Sullivan shows (pp. 390 et seq.), “the affection or reverence which Romanism demands of her votaries for images and saints is adoration.” In the “Pontificale Romanum,” Rome, 1818 (Ordo ad recipiendum processionaliter Imperatorem) it is directed that “the Cross of the legate (i.e., an image), because Latria is due to it, shall be on the right.” She [Rome] gives to the worship which she commands the name of the worship which God forbids and reprobates. The name by which Romanism will have this species of worship known is not inappropriate. It is “douleia,” or, as the word should be presented in an English form, “slavery” or “bondage.” Thus, indeed, the word is translated in Rome’s Scriptures (Douai Bible, Rom. viii. 15; Gal. iv. 24; v. 1). Both the Romish and the more recently published Versions use the word “bondage” in Gal. iv. 24. The “adoration of bondage” is that which Romanism offers to her saints and images. In Romish Versions, the Second Commandment is rendered, “Thou shalt not ‘adore’ them.” Rome says, “Thou shalt ‘adore’ them.”

The distinction between Latria and Douleia, i.e., the worship offered to God, and the worship offered to images, is not admitted by all Romish writers. Thus the Abbé Bergier says: “To express more clearness in their language, theologians call Latria the worship rendered to God, and Douleia that rendered to saints; but originally these two terms, derived from the Greek, signified equally service without distinction” (“Dictionnaire Théologique,” Art., Culte). We admit that originally and grammatically the terms Douleia and Latria are synonymous” (Ibid., Art., Dulie).

To get out of the difficulty Bergier declares that “the words Latria, Douleia, Cultus, service, etc., change their meaning according to the different objects to which they are applied” (Ibid., Art., Latria); thus pretending that “worship may have two meanings,” and arbitrarily assigning to words the meaning most convenient to Popery – not to Truth, not according to the reality of these things.

For, of course, there is a distinction between the words Douleia and Latria. Popery admits it, by rendering the one “bondage,” and the other “service” 2: the one is slavery, the other freedom. The one, Douleia, is the condition from which the Gospel delivers the redeemed (Rom. viii. 15, 21; Gal. iv. 24, v. I; Heb. ii. 15); the other, the reverential acknowledgement made to God – as Deliverer – by the ransomed. [emphasis added]

Popery, therefore, has aptly chosen for its image worship the very name which testifies that while God gives liberty, Rome wishes to bring bondage. Thus is Rome’s opposition to God once more made manifest. She is ho antikeimenos, the Adversary, that sets up a Law opposed to the Will of God. [emphasis added]

1. slavery, bondage, the condition of a slave

"The" Conference for Historical Fiction