…Other pilgrims were making their way to Father Christmas’s home. All but one child hurried away from Mr and Mrs Christian to beg from them. The child True Need put her hand into Mrs C’s and looked up with love and longing.  Mrs C smiled at her, and Mr C swung the sweet child up onto his shoulder. Together the three entered the cheerful residence…

Poetic license: Father Christmas is a traveling man – whether it’s by car, coach, sleigh, or goat as sometimes depicted. Here, he has settled down and has a wife, somewhat like our notion of Santa Claus.

Father Christmas opened the door to Mr and Mrs Christian. “Friends!” he cried. Studying them, he lowered his voice and said, “To be frank, I hadn’t expected to see you here.” His smile faltered just a bit and he seemed almost reluctant to admit them.

His wife, Mother Madcap, peered over his shoulder, her eyes – as green as emeralds – twinkling. “Well, what are you waiting for, Father?” she said. “Let them in, you old fool!”

Father Christmas stepped aside and his guests entered. Mother Madcap slammed the door behind them. “Just remember the city ordinance,” Father Christmas said, laying a  finger to the side of his nose. “Absolutely no solicitation of any kind, within the corporate limits.” He shook Mr C’s hand and winked at Mrs C.

“Where are we…?” asked Mrs C, feeling muddled.

“Why Vanity Fair, my girl – your old neighborhood!”

“Sadly, you haven’t come as far as you feel you have,” Father Christmas said. He winked again and for the first time seemed to notice the little girl True Need on Mr C’s shoulder. He shook his head at the sight of her. “Poor mite! This is the just place for her – she’ll soon be as good as new!”

Mrs C ventured, “We just need a quiet corner to rest before going on, and a little bread and milk for the child.”

Mr C said, “We’ll be up with the sun and gone before you know it.”

Father Christmas straightened the crown of holly on his silvery hair, and Mother Madcap linked her arm through Mrs C’s and squeezed it.

“We wouldn’t think of it!” they cried together. 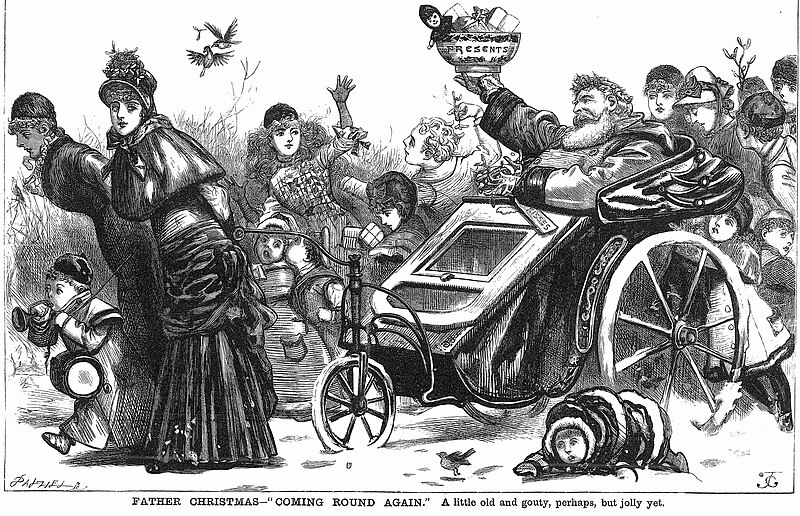 5 thoughts on “Mr and Mrs Christian spend the night with Father Christmas, part 3”